This is a question we often get when a new team builds its first Kanban board. Once the process is visualized on the board, the team must assign WIP limits to create the ideal flow of work. The usual first reaction to setting WIP limits is that the number is too low because most teams are used to multitasking and being overburdened. This is when someone on the team typically asks… What about blocked cards, should they count in the WIP limit?

It depends on your flow of work…

Some teams have a very smooth process where cards get rarely blocked and usually the root cause is an exception. In such a case, there are usually no cards blocked simultaneously and these cards get unblocked fast. In this example, we recommend including the blocked cards in your WIP limit because the team is not avoiding these cards, but instead swarming to get these cards unblocked. The focus on removing the blocks means that all cards including blocked ones get attention from the team and therefore impact their capacity (WIP limits).

For other teams, blocking cards is more common and “almost” an acceptable part of their process. This stop and go flow is not ideal, but until it can be corrected, the team must make a decision about the best way way to still flow cards on the board. The main problem is that if too many cards are blocked, then some team members might be idle and that’s not efficient. This is when a team might choose to not count blocked cards in their WIP limit.

Imagine a WIP limit of 10 for the overall board distributed across the columns for a team of 5 people. If the team has only one card blocked, then the flow isn’t impacted much. The team can continue to work on 9 cards and avoid these cards until they get unblocked. What if the cards stay blocked for an extended time and now multiple cards are blocked? Keep readin for the ansewr in the next section…

Should you ever go over your WIP limit?

The team might choose to go over their WIP limit to avoid idleness, but my favorite saying at that time is “when it rains, it pours”. The analogy is that for no valid reason, all the blocked cards will get unblocked at the same time and now you are over WIP limit with all the cards in play. This will cause overburdening and it will be important to not pull any new card until the team can finish a few cards and get back to their ideal WIP limit.

It can be ok to go over WIP limit because this action can cause a team to realize that the WIP limit was too low and therefore could be increased based on how it felt by operating at a higher WIP limit. On the flip side, if the team is now suffering from longer cycle times and lower throughput, then the WIP limit was correct and the team should quickly get back to respect their WIP limit.

Can WIP limits and blocked card policy be enforced programmatically?

Yes. This is where using an electronic board in a tool like Kanban Zone can be very helpful. Teams may choose to enforce WIP limits by selecting the ON, OFF, or Alert approach. 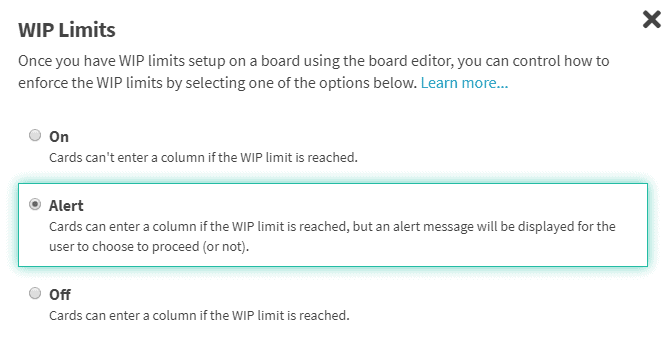 We only recommend using the ON settings for processes that are fully standardized and regulated. In this scenario, users will be prevented from moving cards in a column that has already reached it’s WIP limit. Most teams will choose the Alert setting, so that team members can use their judgment during that short alert. The sheer act of being alerted is often enough to make the best decision. Lastly, if the team chooses the OFF settings, which is the default, cards can flow freely into any column, but the basic WIP limit signal will turn red to caution the team that they are operating above their WIP limit. Learn more in our knowledge base about Setting up WIP Limits. 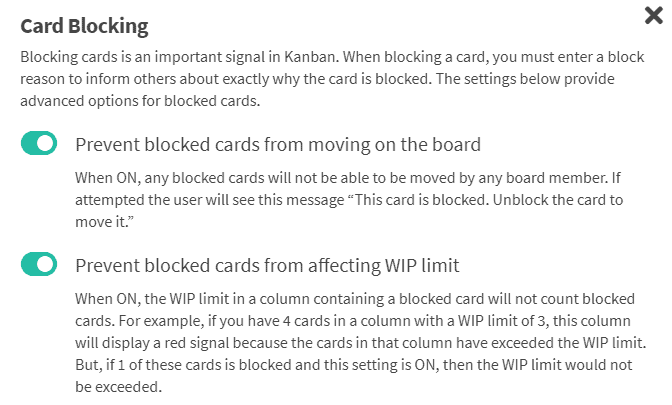 The first one is to prevent a blocked card from moving. I know this sounds obvious that a card marked as blocked should not move until the block is resolved, but this ensures that blocks get removed before being able to move that card. This has the advantage of making sure that cards are “truly” blocked and also that effort is made to always remove the block. Don’t forget that in Kanban Zone, you must provide a blocking reason when signaling that a card is blocked.

The second setting is all about what the team decided to do with their blocked cards. If your team choose to not count them in the WIP limits, then enable that setting and the tool will adjust the calculations, while still displaying how many cards are blocked.

Learn more in these knowledge base articles about Blocking Cards and Card Blocking Settings.

I hope that the scenarios shared in this article will help you decide as a team what is the best approach for your current process flow. Although situational, we still highly recommend respecting your WIP limits, but using your judgment to learn from the experience is also very important for the overall maturity of a team. Kanban only has a handful of properties and WIP limits are one of them, so make sure to have your WIP limits set on your board.

Last note, blocked cards should not become the norm. If you experience too many of these, or cards get blocked for too long then be sure to conduct a root cause analysis. Often you will find patterns or a simple root cause that can be solved upstream to prevent cards from being blocked downstream on your board. Good luck on your journey of continuous improvement.

About the Author: Dimitri Ponomareff

Dimitri Ponomareff is a Coach. Transforming organizations to deliver value faster since 2005, using Agile, Scrum/XP first, and then blending Lean and Kanban. Dimitri has the ability to relate and energize people. He is consistently recognized as a very passionate and successful change agent, with an overwhelming capacity to motivate and mobilize teams on their path to continuous improvements.

You will receive our weekly Blog email that includes any new blogs for that week.

All our blogs are about Kanban and provide short helpful insights to help you take full advantage of Kanban. You will become a Kanban master in no time!

Are you also passionate about Kanban? We accept guest posts.