Toyota Production System (TPS), originally called “Just-in-Time production”, was developed by Toyota to organize their manufacturing operations including logistics, supplier management, up to customer delivery.  Its basic concept is the reduction of cost through elimination of waste and optimization of machine and human capabilities.

Prior to TPS, problems such as imbalanced inventory levels coupled with surplus equipment and workers were experienced by the automobile giant. Toyota decided to put its efforts in the development of a production system that can shorten the time between the initiation and completion of a production process, namely from the entry of materials to the completion of the vehicle. In this type of production, only the necessary products, at the necessary time, in necessary quantities are manufactured. This way the stock on-hand is held down to a minimum.

Equally important, Toyota has built up a system of respect for people ingrained in the TPS concept. It puts emphasis on the points as follows:

Apart from the JIT concept, another essential feature of the TPS is Jidoka. The term Jidoka means to make the equipment or operation stop whenever an abnormal or defective condition arises. In short, its distinctive feature lies in the fact that when an equipment problem or machine defect happens, the equipment or entire line stops, and any line with workers can be stopped by them.

Just-in-Time and Jidoka are the main pillars of the Toyota Production System. The main objectives of the TPS are to design out overload and inconsistency and to eliminate waste. The most significant effects on process value delivery are achieved by designing a process capable of delivering the required results smoothly, by minimizing inconsistency. It is also crucial to ensure that the process is as flexible as necessary without stress or overburden since this generates waste (e.g. waste of overproduction, waste of transportation, waste of making defective products etc.).

A production control system for just-in-time production and making full use of workers’ capabilities is the Kanban System. In Kanban, the supply of parts or components is regulated on cards that contain very clear specifications and instructions. These cards move systematically forward along a production line. Kanban became an effective tool to support managing a production system as a whole, and an excellent way to promote improvement. Problem areas are highlighted by measuring the time between the initiation and completion of a full production process.

This sign-based scheduling system was developed to eliminate waste and improve production efficiency, but can be applied to just about any industry, process or task. 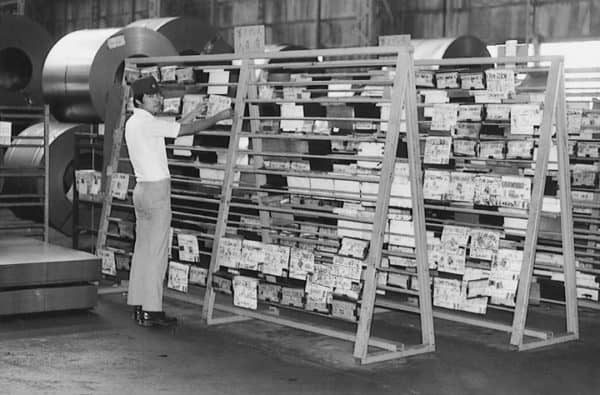 Toyota has six rules for the effective application of Kanban:

The Toyota Production System became the foundation of Lean thinking and production. An extensive study led by researchers from the Massachusetts Institute of Technology in the 1990s titled, The Machine that Changed the World, expounded the results of this then novel approach and pushed it to global recognition. Today, we see Lean being used across industries outside of manufacturing and enabling sustainable businesses over the years.

Are you ready to unleash your full potential with Kanban?

Start your journey of self-development with your Personal Kanban, or set up a Portfolio Kanban system to visualize your ideal workflow.
Leverage our team of Kanban experts and receive our Kanban email educational series.