Lean Six Sigma is a discipline of creating customer value efficiently with quality and consistency. It is a process improvement methodology that focuses on removing waste and controlling process variation to improve efficiency and provide high levels of customer value.

Key influencers and shapers of the Lean methodology include Frederick Taylor, Henry Ford, and Taiichi Ohno. Taylor’s study in the 1890s paved the way for the concepts of standardized work and time and motion studies. These became the foundation of organizational work and decision theory.

In 1910, Ford developed a manufacturing strategy that allowed them to manufacture cars in a continuous flow, a first in the American automobile manufacturing scene. Ford looked at his operations from a process point of view and eliminated wasteful practices to make it efficient. Ford’s methods became the inspiration of car manufacturing giant, Toyota, where Ohno and his team built upon Ford’s production strategy and they created the Toyota Production System.

They found a way to minimize cost while increasing efficiency and without sacrificing quality. Although much of what we know about Lean management today is largely shaped by the TPS, it was an accumulation of decades of studies and experimentation from these first movers.

Lean is a methodology that focuses on building process efficiency through the elimination of waste, variation, and overburdening. Its principles are centered on providing high levels of customer value by establishing a smooth flow through a pull-based system. This is done by continuously improving the business value stream. Today, the Lean methodology is not only used in the manufacturing industry but has propagated to other industries like healthcare, finance, marketing, and tech. To know more about it, check our resource page on Lean Thinking.

What is Six Sigma?

Six Sigma’s development started in the late 1980s at Motorola spearheaded by Bill Smith and Bob Galvin. The primary focus of Smith and Galvin was to lessen defects and errors by improving quality and controlling variation. They used concepts of statistical quality control pioneered by Walter Shewhart in the 1920s and later on developed the pivotal framework of Six Sigma called DMAIC. DMAIC stands for the five phases of Six Sigma – Define, Measure, Analyze, Implement, and Control. This framework allowed Motorola to use qualitative and quantitative data to get to the root causes of problems and establish predictability and precision in their process.

In 1995, Jack Welch of General Electric decided to adopt Six Sigma to overhaul GE’s operations. Through this endeavor, GE reported billions in savings in the course of its 5-year implementation of Six Sigma. This helped spark the interest of other multinational companies in the US and the global arena on Six Sigma. Today, Six Sigma has become a staple business process improvement strategy for companies in various industries.

The five phases of Six Sigma

What is Lean Six Sigma?

Lean Six Sigma marries the efficiency and speed of Lean methodology with the quality control of Six Sigma. This allows teams to improve process performance based on the perspective of the customer. The American Society for Quality (ASQ) defines Lean Six Sigma as, “a fact-based, data-driven philosophy of improvement that values defect prevention over defect detection. It drives customer satisfaction and bottom-line results by reducing variation, waste, and cycle time while promoting the use of work standardization and flow, thereby creating a competitive advantage. It applies anywhere variation and waste exist, and every employee should be involved.” 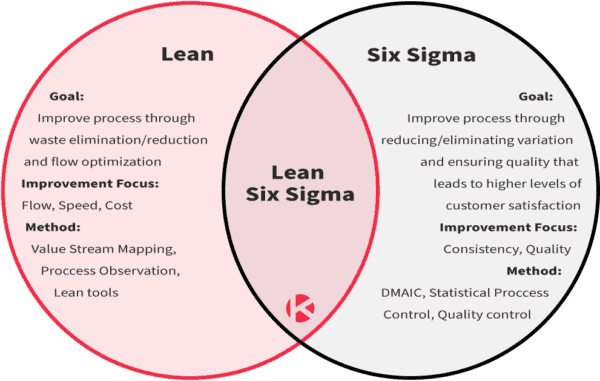 Lean Six Sigma is used to improve business processes through the use of both Lean and Six Sigma tools. The goal is to switch from reactive problem solving to proactive problem prevention. Lean Six Sigma has become a pivotal strategy for companies to combat rising costs and increasing competition and helps them gain a competitive advantage.

Successful implementations of Lean Six Sigma have been carried out through following these principles:

All About Lean Six Sigma

Lean Six Sigma is a data-driven structured approach to solving problems and improving processes. The framework guides teams and allows them to be thorough in addressing the root causes of the problem and developing solutions that effectively improve the process. Lean Six Sigma has specific roles for the implementation of projects and improvement initiatives. With a successful Lean Six Sigma implementation, companies can realize better product or service quality and increased value for its customers. This is the goal of Lean Six Sigma.

Are you ready to unleash your full potential with Kanban?

Start your journey of self-development with your Personal Kanban, or set up a Portfolio Kanban system to visualize your ideal workflow.
Leverage our team of Kanban experts and receive our Kanban email educational series.