Why Multitasking Doesn’t Work – And How Kanban Can Help

Why Multitasking Doesn’t Work – And How Kanban Can Help

Multitasking is defined as the performance of multiple tasks at one time. Experts agree that, aside from a couple of exceptions (like walking while chewing gum), multitasking isn’t really possible. Research has shown that we don’t actually do things simultaneously, we just switch back and forth so rapidly we don’t realize we’re doing it. Instead of multitasking, experts now refer to this as “task-switching.”

In our society, people seem to be very proud of their alleged ability to multitask, but, in truth, rapid task-switching does not work well. Our brains function optimally when we focus on one task at a time. Every time we switch tasks (whether quickly or slowly), we engage four areas of the brain – the pre-frontal cortex, posterior parietal lobe, anterior cingulate gyrus, and pre-motor cortex (Source: Multitasking: Switching costs from American Psychological Association). That’s a lot of brain matter tied up in each switch. Think about this in terms of driving while talking on a phone or texting. According to David Meyer, a psychology professor at the University of Michigan, “If you’re driving while cell-phoning, then your performance is going to be as poor as if you were legally drunk.” That’s a frightening reality.

NPR conducted an interesting experiment with a professional piano player to test this in real life. They had him play music while performing other tasks like answering questions about his childhood. Things like that weren’t too difficult, but when the challenges took more brainpower, like solving math equations, he had a harder time playing and answering simultaneously (Source: Bad At Multitasking? Blame Your Brain from NPR). So yes, engaging all of these brain power switching tasks has been shown to kill productivity and accuracy. Each task switch might waste only a fraction of a second, but if we switch all day long, it adds up. Some experts say the cumulative effect of all this switching can translate into a whopping 40% drop in productivity. And, as you would expect, the more we multitask, the more errors we tend to make.

How Kanban Can Help

It’s clear that rapid task-switching is not the path to optimal productivity and efficiency. So what is the answer? Well, according to experts like Devora Zack, the answer is to focus on one thing until it’s complete. What a concept! She calls it single-tasking and describes it here:

Single-tasking is better for your brain, your emotional outlook, your productivity, and your accuracy.

One of the most effective ways to help narrow your focus and “single-task” is to use a Kanban board that visually displays work in various columns and maps it into small steps. A Kanban board naturally combats overwhelm and facilitates focus because it forces you to prioritize tasks and limits how much work can be taken on at a given time. Here is a super basic visual example of a Kanban board. It can be done very simply on a whiteboard with Post-its: 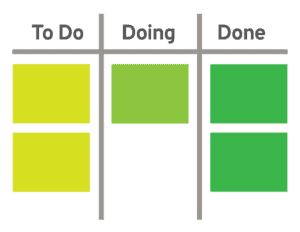 Kanban helps you first prioritize tasks, then move them into appropriate columns before beginning the actual work. And Kanban boards limit the Work in Process (WIP) in each column such that you cannot overload the work moving across the board. You move a task into “Doing,” work on it and move it to “Done” when it’s complete. And you can’t move another card into “Doing” until the current task is finished. Compare this Kanban board to the hand-scribbled, chaotic “to-do” lists we all seem to keep on our desks. On these lists, nothing seems to be a priority; there is no structure and no plan and it can actually cause us to not start anything at all. Transferring each of these tasks to a Kanban card would go a long way in eliminating overwhelm and all the things on the list would be completed more timely. A Kanban board helps you to visualize, organize and prioritize work, and simplify the selection of tasks.

We are all busier now than ever before, but are we getting things done? And, if we are, are they accurate? And what is the emotional and physical toll it’s taking juggling so many things at the same time? It’s been shown time and time again that multitasking doesn’t even really exist, and that rapid task-switching results in lower productivity, efficiency, and accuracy. The time has come to start a new movement of single-tasking so we all get more done in less time with no stress or overwhelm. Kanban boards are the key to getting us there.

About the Author: Dimitri Ponomareff

Dimitri Ponomareff is a Coach. Transforming organizations to deliver value faster since 2005, using Agile, Scrum/XP first, and then blending Lean and Kanban. Dimitri has the ability to relate and energize people. He is consistently recognized as a very passionate and successful change agent, with an overwhelming capacity to motivate and mobilize teams on their path to continuous improvements.